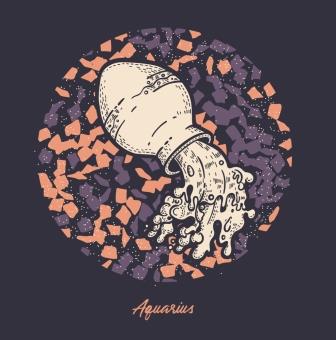 Aquarius have two rulers – Saturn and Uranus; you can expect them to have original thoughts and ideas that are unexpected to most. That said, the Air sign traits then kick in, making any ideas fixed in their minds. It is the eleventh sign of the zodiac, and you are an Aquarian if you were born between 21st January and 18th February.

The Aquarius symbol is that of a water carrier or water bearer. Humanity is a keyword for Aquarians, and their glyph icon of ripples symbolise a union of intuition and humanitarianism.

The style of an Aquarian can be eclectic; it can run the gauntlet from charity-shop finds to military clothing to high-end designer items. They probably come across as quite outrageous, although that is rarely their intent. Often, they are tall, even wiry – they may not pay too much attention to cosmetic appearances like teeth and hair. They are more likely to be described as purposeful than graceful!

An Aquarius is often quirky. They can be scientific in their approach to things, but they also have a genuine interest in others. You may know several Aquarians and find they are different from each other. Their personality is likely influenced by which ruler is dominant in their chart.

More positive traits are their ability to communicate, caring and thoughtful, independent, inventive and loyal. On the negative side, you might see them come across as insensitive, eccentric, self-interested and unwilling to share ideas.

Many consider Aquarians to be aloof. They are a bit of a muddle when it comes to emotions. They like routine and stability in their day-to-day lives. When it comes to relationships, commitment and predictability make them feel stifled.

The above paragraph may give you pause for thought with love and relationships with an Aquarius. Perhaps the route to an Aquarian is through friendship first. A relationship is likely to thrive if space is agreed – so that Aquarius can still be independent. Deep-down they are afraid of commitment, so slowly is the winning approach.

Aquarius have a lot of foresight; they are ahead of their time. Especially in terms of where the world needs to be in the future. They also have a well-rounded social conscience.