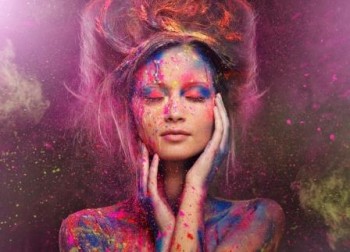 As humans it is believed that we have two bodies, a physical body and an ‘auric body’ – an invisible energy. When we astral travel the aura separates from the physical body, but at other times it is felt as an outline to the physical body. Auras extend across the whole body outline, but those that can see and sense their energy often find the aura strongest around the head region. If you look back through history many images of people are depicted with a glow or halo.

There is a method for detecting the aura of a person called Kirlian photography; the method uses high frequency electronic photography to create a picture of the persons patterned outline, including all of the sparks and energy flares that make up the aura. It was so named after the Russian professor Semyon Kirlian.

The aura system is actually made up of seven layers, these help to explain the complex connections between mind, body and soul and the higher planes.

The Seven Layers of the Aura System

The 1st layer is the etheric layer, this can extend anywhere from 5cm-1cm from the skin, as this layer is the closest to the body it is also the layer most likely to be seen. It might appear as a haze or a grey light, but a practised psychic might see it as a red layer, this is due to the close links to the root chakra. An experienced person may even be able to detect illness through the aura, if someone is exhausted it will most likely show in the etheric layer – the colour/haze will show a general dullness.

As you will no doubt have guessed from the name the second layer deals with the emotions, not just our own feelings, but the emotions of the people we meet and come in to contact with as well. This layer also follows the human body outline; it is a swirling layer of energy that predominantly deals with the person’s identity: self-esteem, attractiveness and self-worth. The overriding colour here is usually orange, darkness or rips in the band of colour can demonstrate the person is under stress or going through a period of anxiety.

The third layer of aura deals with ideas and thoughts, taking concepts and making them in to a reality. As you progress through the layers the colours have less to do with the physical person and the body outline. So for this layer it may be that the colour is predominantly around the head and shoulders – a yellow hue should be seen. This layer may be more difficult to see if the person is suffering with migraines, depression, insomnia or high blood pressure – any illness that will interfere with the ability to make ideas substantial.

The physical layers and the astral layers are marked by the 4th tier. This division concerns the bonds and interactions formed between people, whether they are family, lovers or friends. Any disturbances in the green glow of this layer show that all is not well with love and relationships.

The fifth layer is an imprint of the physical body on a higher level. Most often this layer is depicted as navy blue, but sometimes it can just be clear. Dark spots here can show the person is not body-confident, they may suffer from eating disorders or addictions or they can be severely overworked. Perfectionists will suffer with showing this level.

The sixth layer concerns itself with the celestial emotional body on the spiritual plane. It is here that people communicate with other dimensions, whether that is through spirit guides, angels or the higher-self. This level of trust and undivided love is shown through indigo and purple colours. Disorders affecting this level are nightmares and an inability to take action. A strong colour here is likely to mean the person is highly concerned for others and world problems in general, but they may feel helpless to act.

The seventh and last layer is the highest auric level; this layer (the ketheric template) is sometimes referred to as the causal body – the highest layer of spiritual level. This layer will be pure white or shining gold. It is only through this layer that we can become at one with pure spirit, the cosmos and Divinity.