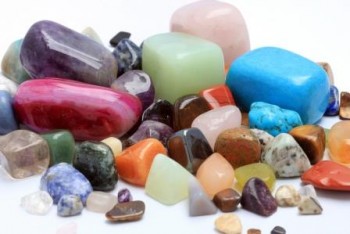 If you are not familiar with them, birthstones (or birthday stone) is a gemstone that represents each month of the calendar. Birthstones are usually worn as jewellery and their power is thought to be heightened by wearing it during its assigned month.

The origin of the birthstone is thought to date back to the Bible. At the time, Aaron, known as Aaron the Priest, wore a breast plate of 12 jewels, representing the twelve tribes of Israel. As centuries passed, there was thought to be a connection with the jewels on Aaron’s breast plate and the twelve months of the year. Each stone had qualities associated with it, making it unique from all the others.

The garnet promotes romantic love and intimacy, and has been labelled the gem of faith, constancy and truth.

Amethyst has the ability to quicken intelligence, control evil thoughts as well as aid physical conditions such as arthritis and circulatory problems.

Named from the Greek – Aqua (water) Marina (the sea), Aquamarine is the gem of the sea and the sailor’s token of luck. Aquamarine is worn to ensure good health, aiding the liver, throat, stomach, jaw, teeth, eyes, and ears.

Some would say it is always good luck to wear Diamonds! However, in April the Diamond provides its wearer with courage and victory over their enemies. It is also a symbol of innocence.

Dedicated to Venus the Goddess of Love, the Emerald was valued by the Ancients for its ability to aid quick thinking, eloquence and the power to see into the future.

During the time of the Roman Empire the Pearl was the favoured jewel of the rich. Women wore pearls in bed to be reminded of their wealth as soon as they woke.

The red ruby is thought to be a symbol of freedom, charity, dignity and divine power.

The wearer of Peridot will enjoy happiness in marriage, as it heals stress in relationships, and lessens anger and jealousy.

The sapphire helps the wearer to alleviate pain and maintain inner peace. The gem is also regarded as a symbol of truth, sincerity and constancy.

Shakespeare in ‘Twelfth Night’ referred to Opal as ‘The Queen of Gems’ The Romans considered opal a symbol of hope.

Thought to be one of the most powerful gemstones, it is believed that Topaz can drive away sadness, strengthen the intellect and give courage to the wearer.

Turquoise provides a sense of inner-calm, and allows you to express your creative side. It works on the meridians of the body whilst strengthening the immune system.