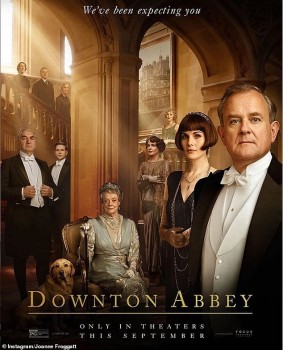 Are you a fan of Downton Abbey? It was a very popular British period drama based in a fictious Yorkshire counrty estate, about the Crawley family. The six seasons charted a time-frame between 1912-1926, following both the family members and their domestic servants, against a backdrop of historical events.

The programme was a surprising hit in America, being played on PBS. But sadly, in 2015 Carnival Films & ITV made an announcement that the sixth series would be the last.

Fans, have had to wait four long years, to get a continuation of the series, in the form of a film. In UK cinemas it will start playing from the 13th September.

So, what do we know so far about the film adaptation?

Who will be in the Downton Abbey film?

You will be glad to know that many cast members from the TV show will be in the film, such as:

There are several newcomers, for instance Imelda Staunton is joining the cast to play Lady Bagshaw, based on the trailer this makes for some great bickering with Dowager Countess!

What is the backdrop for the movie?

Without giving too much away… The film is set in the year 1927, which is one year on from the end of the TV series. They are going into the period of the Great Depression, and as such there is an element of austerity for the Crawley family, with less servants.

Lady Mary considers leaving the estate altogether, there is a potential Royal invasion and Branson gets a new love interest!

Recap of the final season:

As it has been four years since the final episodes aired, you might have forgotten what went on. So, here are some plot re-caps, without revealing too much in case you want to re-watch, or start watching:

Lady Mary remarried, she was running Downton and was pregnant. Lady Edith was happy, married and defied the time to have a career in magazine publishing. Anna & Bates had a son – finally! Cora became Hospital President (happening as a result of Dowager Countess ceding the role), and Robert took a step back. Mr Mosely became a school teacher. Lady Rose went to America. Mrs Patmore set up a B&B. Thomas lived to tell the tail of his suicide. Daisy fell for Andy. Isobel married Dickie. Mr Carson had to retire due to ill-health, but he did get together with Mrs Hughes. Tom & Henry set up Talbot and Branson Motors.