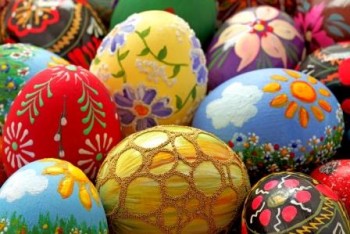 ‘Lady Day’ is celebrated on the 25th March; according to the Christian calendar this is the day that Archangel Gabriel appeared to Mary, exactly nine months before the 25th December. From Lady Day through Easter church altars will often be decorated with lilies to symbolise the Annunciation and the Immaculate Conception. Paintings depicting the Annunciation often show Archangel Gabriel giving Mary lilies.

According to legend the Saxon Goddess Eostre found a wounded bird; in order for it to survive the winter she turned it in to a hare. The hare was able to lay eggs; each spring it decorated the eggs and left them as a gift for the Goddess. The exchanging of eggs is a long standing tradition and not always associated with Easter; for example Iranians give eggs died red in colour to mark the New Year’s first day. Ancient Romans, Egyptians and Greeks celebrated spring with coloured eggs. The dyeing of eggs in the colour red is meant to symbolise Christ’s blood and the colour is also associated with rebirth and fertility. Perhaps the most famous eggs are those commissioned by the Russian Tsars Alexander III and Nicholas II who gave their wives enamelled eggs that had been exquisitely crafted by Faberge. This tradition became fashionable amongst aristocrats and royalty in early modern Europe.

Most species of Hare are nocturnal but when they need to mate they appear during the day. Unreceptive females will ‘box’ persistent males to deter them. These rejected males become frustrated and behave erratically – it is this behaviour that led to the phrase ‘Mad as a March Hare’, the March Hare and Mad Hatter were later immortalised as part of Lewis Carroll’s Alice in Wonderland. The Hare traditions originated in Germany and are mentioned in 16th century writings. In the 17th century German settlers took the traditions to America where it became common place to leave out grass nests and Easter bonnets to be filled with treats from the Easter Bunny.

Ref: Ceremonies of the Season by Jennifer Cole