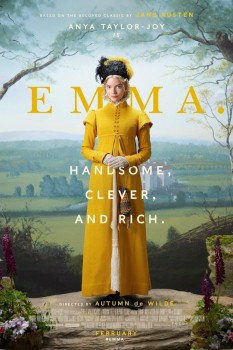 Emma is coming to cinemas on Valentine’s Day in the UK. It is not the first film adaptation of Jane Austen’s charming novel. For those of you that have not read the book, or watched a previous film it is a comedic romantic misadventure!

Emma Woodhouse is the lead character, she is being portrayed by Anya Taylor-Joy, whom you might know from Peaky Blinders and The Witch. In the film she is a young and wealthy woman, who likes to play the role of romance matchmaker in her local town, stirring up trouble as she goes. She is somewhat of a restless ‘Queen Bee’. For her own part she has to try out several love mismatches and take many romantic missteps to find an eventual love that was there all along!

A pivotal role from the book is that of Miss Bates, a friendly spinster – who is played by our cover star Miranda Hart. Many other popular British actors round out the cast, such as Bill Nighy who plays Emma’s father. Mr Elton acted by Josh O’Connor (The Crown), Rupert Graves (Sherlock) as Mr Weston and Gemma Whelan (Horrible Histories) as Mrs Weston to name a few.

The film is actually a debut, directorially for Autumn de Wilde. Who is more renowned as a photographer working with actors and musicians. It will be interesting to see the direction she takes the movie, given its previous adaptations. You may remember a version from 1996 that featured Gwyneth Paltrow, and there was even a BBC series with Romola Garai in 2009. You may have even seen the rom-com Clueless (Alicia Silverstone), and not realised that was a modern-day version of the Emma novel. Eleanor Catton (Man Booker Prize winner) has written the script, who you may recognise from The Luminaries.