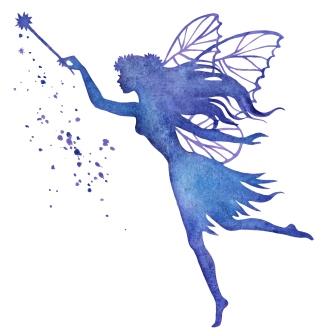 Most of us think of Fairies as ethereal magical beings from children’s story books and fables told at the end of the garden, but in fact they have been common in many cultures as immortal earth spirits that occupy a space somewhere between the spirit world and Earth, sprinkling their magical powers as they go…

Often Fairies (sometimes called Faeries) are closely associated with the elements and the natural world – Earth, Fire, Water and Air – as if they come from an elemental realm.

The winged type creatures that fairies are depicted as are most associated with northern European countries and places where Celtic folklore was abound, such as Brittany, Cornwall, Wales and Ireland. If folklore is to be believed then fairies can make themselves visible to anyone if they choose, but as a general rule only those with the gift of clairvoyance would see them.

There are different ideas about the origins of fairies:

Perhaps the unknown origins is what gives people the impressions that fairies can either be a blessing and bestow good luck, health and happiness upon a person, or equally can cast a darker side over life if they desire…This may also account for the different names that they have accrued along the way: Nymphs, Pixies, Sprites to name a few – all of which conjure up mischievous connotations.

Many stories suggest that fairies occupy a different perception of time to us, living in a timeless underground world, stepping out at night to make mischief, to sing, to dance and to travel.

Whatever the case the 18th century onwards has seen the belief in fairies leaving our world; but perhaps the passage of time has the fairies making their message of being kind to nature in new ways such as through visions. There is certainly no harm in honouring the spirits of fairies as a metaphor for respecting Earth and the animal kingdom.

Capricorn are ruled by the planet Saturn. They are the tenth sign of the zodiac, dated 22nd December to 20th January. Their symbol is the Sea Goat, who rose...