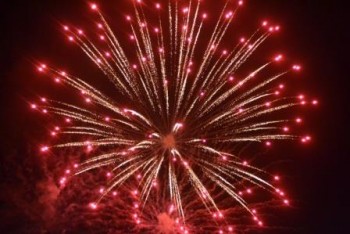 Is your firework repertoire more Catherine Wheel and Sparklers, than Spider and Fish? Then read on to see the names of some of the explosions in the sky you are likely to see at Bonfire Night and New Year celebrations as 2021 draws to a close!

This fire cracker looks like the Chrysanthemum flower in the sky, it is compiled from spheres of stars followed by a trail of sparks. If you are lucky, you will see multiple blooms with double and triple versions.

This firework makes sense of its name, for a start off the noise is very loud (sounding very cross!) and the effect in the sky is a crisscross pattern, the stars usually break into four or five smaller stars as it falls through the air.

The fish propels itself from a fuse through the air, as it bursts and lands it looks like hundreds of tiny fish are swimming away from the main core.

This firework is always a crowd pleaser, it has a thick tail, but then branches erupt and fan out, so that the end result looks like palm trees in the breeze.

Another flower in the sky, the Peony usually covers a large distance, with a large expanse of coloured stars forming a sphere, that literally burns itself out until there are no sparks left.

Usually this firework appears as a circle, it is simple, but effective – creating a halo-like effect.

People often jump at discovering a spider, and this firework is likely to create the same emotion, it bursts into the sky – hard and fast, shooting stars out straight and flat as it goes.

Sometimes the waterfall is known as the horsetail, it isn’t as dramatic as some of the others, but is pretty none the less, but make sure you are watching as it falls quickly.

Similar to the waterfall this firework droops as it fills the sky, to create the effect of a weeping willow tree, it is large and beautiful and lights up the sky for some time before disappearing for another year.