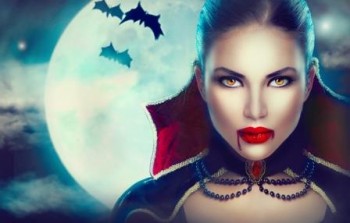 Are you going to a Halloween themed costume party? Then read on for the folklore behind some of the favoured Samhain costumes:

Ghosts of course come in many guises, but the typical party costume is often made up of a white sheet to depict a frail and delicate ghost of a person. Which makes sense as ‘ghost’ is the term used for the apparition of the dead, and we often imagine that ghosts will be in human form, but often transparent or misty, demonstrating that they are no longer a whole being, but just the disembodied soul travelling the afterlife. Depending on your life experiences as to whether you will find a ghost scary or not, but for many they tap into our deepest fears about what life after death might hold!

There is no doubt that modern television programmes have romanticised and popularised the vampire, making it a well-liked costume outfit. But earlier vampires were much more terrifying, not surprisingly as they are the ‘undead’ – a resurrected corpse! Vampires are in essence a type of ghost that leaves a grave at night-time to enter the world of the living. They are often depicted as superior beings, but in reality, these fictional characters cannot survive without humans, such is their need to drink their blood, and so then it is easier to see them just as the monsters they are.

To understand werewolves, you first have to go back to ‘lycanthropy’, which is a belief that it is possible through witchcraft to form into the shape of an animal. Werewolves are usually depicted in modern times as shape-shifting from a human being who looks perfectly normal, to a scathing and snarling deadly wolf-person. Legend says that you too could be turned into a werewolf should you succumb to a bite! The best way to view them now, is as a metaphor for life – some people will hide their true nature from you, and at the point their real personality is revealed you may find them to be cruel at heart.

There are different depictions of the witch, at a party you may see a sexy lady all dressed in black complete with a broom, cat or wand, or someone may choose the ‘Pagan Triple Goddess’ witch look – which is more haggard old lady, complete with pointy hat and warts aplenty. Of course, throughout times witches have been persecuted, but many that choose the costume will be complementing the folklore that witches are a magical self with the ability to achieve things that us mere mortals cannot! They have much experience, wisdom and compassion to offer.

Zombies have also been commercialised through television programmes, in fact, zombies can be traced back to Voodoo traditions, a zombie was a reanimated corpse, seemingly resurrected from dead, to become a soulless indebted servant to his master. In this scenario it is unlikely that the person was actually dead, but merely suspended in time through a drug cocktail, and then buried alive. Some of these aspects are now being used to depict a breakdown in society, and the loss of control that people experience when abusing substances, so perhaps not the most poetic of costumes, although quite popular.