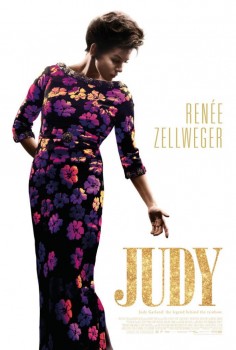 There have been quite a few biopic films of late, Bohemian Rhapsody and Rocketman to name a few. You might imagine then, that the film Judy would deal with Judy Garland’s most famous period, in her Wizard of Oz days. But, in fact the film details a period thirty years on from then, when it’s fair to say she was exhausted by the fame of being a superstar.

Renée Zellweger plays Judy Garland. It is never easy casting such an iconic person, and as such Renée had to endure several hours a day in the costume and make-up departments, being made-up to look like the star.

Of course, when you think of Renée Zellweger, many of us will jump immediately to Bridget Jones. But she has had an illustrious career, outside of that pink & fluffy role. For example, she was an Oscar winner for her role in Cold Mountain.

It is natural for you to assume that playing Judy Garland will require the actress to be able to sing. Renée is no stranger to that either, having sang in the film version of Chicago in 2002.

Also starring is Rufus Sewell, who you might know from Victoria, as her third husband. Finn Wittrock plays her fifth husband! Judy’s daughter is acted by Bella Ramsey (Game of Thrones). Jessie Buckley – who we featured in a previous Free Spirit magazine for the film Wild Rose will also star, as will Michael Gambon (Harry Potter).

The film will focus on the year of 1968, at a time when she was due to appear in the ‘Talk Of The Town’ in London, to sold-out audiences. At this point she had literally been working for forty-five years, she was fragile and fatigued. Her main desire was to spend time with her children, back home.

You can see from the trailer, that life was difficult – she new how to charm her musicians, but she clashed with ‘management’. She was still warm and witty, and loved nothing more than reminiscing with friends, and being adored by her fans.

The film will be released in the UK on the 2nd October 19. There is already an air of Oscar buzz around the performances:

Liza Minnelli, who is Judy Garland’s daughter in real-life, stated on Facebook: ‘I do not approve nor sanction the upcoming film about Judy Garland in any way.’ She made the statement to clarify things that had been said in the press about her collaborating, but doesn’t appear to state why she doesn’t approve of the film.

The word paranormal is another word for unexplained phenomena, and more people have become interested, after unexplained activity such as the Fox sisters,...