King of the Woods 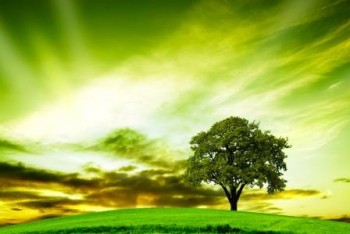 Druids called oak trees ‘King of the Woods’; in Celtic tradition it was the most important tree in the summer woods.

The oaks status as a majestic tree is owed to its longevity – with some trees living for 2000 years. It has a tendency to spread its roots and these are often visible above ground, its long-life is despite the fact it is the tree that is most likely to be struck by lightning!

At midsummer there is a symbolic battle between the oak tree and the holly tree; in the run up to summer solstice the oak tree is growing and is powerful, flush with green leaves and represents optimism and vitality. But at summer solstice the ‘Oak King’ is defeated by the ‘Holly King’ who takes over until winter solstice. Of course this symbolic battle is just representative of the balance of the seasons.

Midsummer fires that were lit were traditionally made of oak logs to figuratively fuel the sun. The extending branches and roots of the tree are said to embrace the three realms – heaven, earth and the underworld.

In terms of astrology if you were born under an oak tree sign (10th June – 7th July), then you are lucky as it is considered one of the most powerful signs in Celtic astrology. As a person you will always champion the underdog, you are protective and you like to give a voice to those that cannot speak for themselves.

In relationships you are nurturing, open-hearted and supportive. You take a positive view on life and others consider you to be a gentle-giant. You always respect and remember your roots, you are naturally confident and passing on your knowledge comes natural to you, making a career as a teacher or mentor an obvious choice.

Family, friends and a sense of community are key to your well-being. To live a long and happy life you need some structure and an ability to feel that you are in control.

In love the best matches are found in Ash or Reed signs, but you can also make a happy pairing with Ivy signs. The summer season may bring its challenges for you, especially when dealing with those in positions of authority – but don’t worry – you can handle it, plough forward and show them what you are made of!

I’ll leave you with this thought:

When two oaks are seen together, the space between them is supposed to act as a doorway to a realm of fairies and other dimensions!