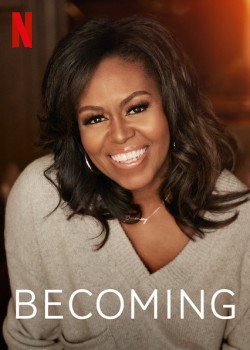 I’m sure most of us have watched a bit more television than we would do normally, during the recent lockdown phases. If you’ve reached the point where you can’t find a new box-set to delve into, then why not consider a memoir, autobiography or life story?

Many of the television streaming and catch up services offer hidden gems of this variety. We take a glance at just a few of the life story options available right now:

The Story of Diana: A 2-part series from 2017, that explores her life and struggles, with interviews from her brother and others that knew her.

Whitney ‘Can I Be Me’: A documentary that starts in the early years of her musical career, covers her love-life, addictions and then takes you right to the end with her shocking death.

Becoming: The First Lady Michelle Obama (our cover star), wrote and then toured an incredibly successful book and memoir called Becoming. This documentary was made as she toured, and includes looking at her life, hopes and connection with others.

You might also enjoy these docu-style life story programmes from Netflix: Trump – An American Dream. Inside Bill’s Brain – Decoding Bill Gates. Diana – In Her Own Words. Barack Obama – The Final Year.

Tom Jones at 80 (BBC iPlayer): This programme takes a journey through Tom’s sixty years in showbusiness! It doesn’t skimp on his best songs and greatest performances, with great archive footage and interviews with Tom himself.

Being Gail Porter (BBC iPlayer): This is a timely documentary, that explores the subjects of mental health, depression as well as self-harm to name a few topics. Gail’s journey from stardom in the 90’s to now is catalogued, as she meets and talks to medical professionals as well as relatives and friends.

George Michael: Freedom (All4.com): George fully took part in this documentary, and it is narrated by him, taking an intimate look at his life, fame and award-winning career as a songwriter and performer. Sadly, the star died before it was completely finished, and as such it is his final words on the story of his life. It does include personal footage, that was never seen before.

Biopics (Season 1 Episode 3) The Real Patrick Swayze: In His Own Words (My5): This episode depicts Patrick’s internal struggle with his fame and public persona, versus his own acceptance. Despite his good looks, charm and success, he spent a lot of his life trying to live up to others expectations, whether real or perceived.

Attenborough at 90: Sir David Attenborough actually got into television by accident, and thank goodness he did! He sits down with Kirsty Young in this 60-minute documentary celebrating his career and life.

Tiger Woods: Back: Tiger Woods has had quite the journey, this programme takes you through the highs and lows of Tiger’s career, as well as charts his amazing win of the fifth masters, despite all of the controversy and injury he had to overcome.

Hillary: Hillary Clinton is a divisive figure, so it is no wonder that this docu-series is set out over four episodes. It takes an intimate look at her roles as First Lady, Secretary of State and latterly her run as Presidential candidate in 2016.

There are other documentary style programmes that might interest you on this channel, about the following people: Steven Spielberg, Paul Gascoigne, Mike Tyson, Steve Jobs, Muhammad Ali, Warren Buffett and Jane Fonda to name a few…