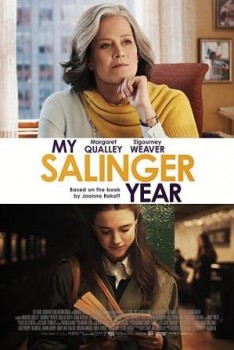 In-door cinemas officially re-opened their doors in England on the 17th May 2021. Quite a few releases are scheduled to set off the season: My Salinger Year (more on that below), Benedict Cumberbatch is straight out of the gate on the 17th with The Courier. Alongside Nomadland and Maya the Bee 3: The Golden Orb.

Ryan Reynolds stars in Free Guy (21st May), and on the same day the delayed Peter Rabbit 2 finally gets screened. Then there is a starring role for Billie Piper in Rare Beasts – which is also her directorial debut.

If all goes to plan Fast & Furious 9 will be out at the end of the month (28th), as well as Cruella (Disney) and The Conjuring: The Devil Made Me Do It from Warners.

Of course, it remains to be seen if this line-up stays, as many film release dates have been juggled during the pandemic. Fingers crossed our feature film – My Salinger Year will play as expected in cinemas from Friday 21st May. Interestingly when the UK/Ireland rights were accrued, the film was renamed as ‘My New York Year’!

Margaret Qualley plays Joanna in the film, her dream is to become a writer, but after graduate school she’s hired as an assistant in a literary agency.

The film is set in the 90’s in New York. The Agency is somewhat old-fashioned, and Joanna works for Margaret, played by Sigourney Weaver. Margaret proves to be somewhat of a stoic character, as she acts as a literary agent to famed writer J.D Salinger.

Joanna should be living the good-life, but rocks from glamour to poverty. Surrounded at work with archaic wood panelling, dictaphones and typewriters. With agents for company, who still think it’s the good old days, where a three-martini lunch and afternoon nap are still considered acceptable!

The role Joanna is actually tasked with is processing the writer (Salinger’s) fan mail. She is supposed to do this in a very ‘agency-style’, essentially a standardised impersonal letter. However, after a while, reading the sometimes-heart-breaking correspondence, she begins to pen much more personalised responses.

The results of her letter writing are moving and humours in equal measure, but ultimately lands her in trouble. However, it is probably all worth it, whilst she has been penning replies imagining the great writers’ responses, she inadvertently finds her own writer’s voice!

Sigourney Weaver needs little introduction, but you may be less familiar with the star – Margaret Qualley. She is actually the daughter of Andie MacDowell, and initially trained as a ballerina as well as doing some modelling work. She has actually been steadily working in television and film since 2013, she had a main role for 4 years on the show The Leftovers.

We wanted to reward our loyal clients with a Summer Offer – enjoy! Credit Card Offer Buy a 20-minute reading and get 5 minutes free! Or Buy a 30-minute...