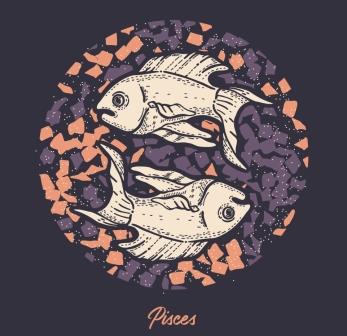 The ruling planet of Pisces is Neptune, making them practical and on the home-front – domesticated. To be satisfied, things need to be okay at home. Pisces are incredibly sensitive to their surroundings, so they can find house moves, decorating, even going on holiday a challenge.

Pisces is a mutable water sign with two fish for icons. Ultimately, they are changeable; some find it easier than others to rise above challenges and come out on top. Others; are more tempted to accept their fate, even if this lands them at the bottom. This sign often feels pulled in two different directions. It is the twelfth sign of the zodiac, and you are a Pisces if you were born between February 19th and March 20th.

Those that find creative pursuits and have stable home lives are more likely to be successful elsewhere in their life. Pisceans often have an affinity with the animal kingdom; they also like music, art, film, finding the beauty in things, and of course, anything to do with water.

They can lose themselves in others, collecting up feelings, sentiments and even hobbies of those they spend time with. So, at times it can be hard to see where Pisces ends and someone else begins.

As you might expect from a non-assertive personality, they are more likely to say yes, than no. Pisceans can occasionally use this to play being a victim. In reality, sometimes they say yes to things they have no intention of doing, don’t have the skills to do or the time to do!

Pisces do have strong emotions, they can be a bit moody – something that can annoy partners, but they will never admit it as they don’t really see it as a character trait in themselves.

They tend to adore their partners and often overlook their faults. Pisceans are sensitive souls, and they are affectionate with those they love. They will empathise with their loved ones, and you’d probably consider them romantics.

Pisces signs are compassionate, kind and loving – making them great in relationships of all types.

You might consider Pisces one of the most intuitive zodiac signs and usually; the most empathetic. They are kind-hearted, imaginative and generous.

We wanted to reward our loyal clients with a Summer Offer – enjoy! Credit Card Offer Buy a 20-minute reading and get 5 minutes free! Or Buy a 30-minute...