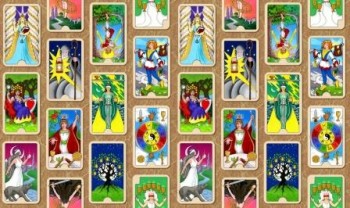 The Tarot dates back more than six hundred years; the deck is made up of 78 cards – 22 are in the Major Arcana and 56 are in the Minor Arcana. Tarot has long been associated with esoteric interest; when the cards are shuffled and dealt in to a spread they become open to psychological interpretation and are used as a method of divination.

The history of Tarot’s development is sketchy, but broadly speaking people believe it developed in the 15th century in Italy. At that time it is likely it was a simple card game, played with a normal pack of cards with extra cards added to form ‘trump cards’, which later would become the Major Arcana. It probably wasn’t until the 18th century in France that the Tarot cards role as a method of divination was advertised. But by the 19th century it was well and truly formed as part of mystical beliefs.

In 1909 when the most notable deck (Rider-Waite) was produced a psychological element was introduced. Carl Jung a Swiss psychologist was interested in the Tarot and he identified many aspects of the Major Arcana as types of transformation.

The illustrations of the early cards were taken from alchemy, mythology and astrology. Throughout the 20th century the concept and designs have grown rapidly. You can get classic decks, those based on history, esoteric ideas or even fairies.

Interestingly Tarot is a form of divination that can be performed by a person for themselves, but equally a reading can be done for another individual. Technically there is no limit to how many times cards can be read, but continuous readings are likely to eventually lead to confusing messages.

The cards are shuffled before a reading to align with the energy of the person seeking the reading as well as to mix the cards. Whilst this is happening the question they want to ask should be at the forefront of their mind. Then the cards are laid down, this could be in a specific pattern – known as a spread. The cards can be drawn from the top of the deck (face down) or drawn at random.

The Major Arcana cards in the deck will always be fully illustrated, generally it is accepted that they depict our journey through life. The order of the cards can vary from pack to pack depending on the esoteric beliefs of those that designed them.

The Minor Arcana may be illustrated, but in some packs they will just be depicted by the symbols of the suit they belong to. The 56 cards are divided in to 4 groups: Wands, Pentacles, Swords and Cups. Similar to normal playing cards, there are numbered cards from Ace to Ten and then Court Cards – King, Queen, Knight and Page. The Minor Arcana deals with the people we meet in our lives as well as the situation we will encounter on a day to day basis.

It is possible to have a Tarot reading with just one card, but many involve multiple cards, such as the 21-card Bohemian spread or the 10-card Celtic Cross spread. Whatever the case, the cards are laid in a specific pattern; each card within the pattern will have a special meaning. Some spreads will have a card called the significator; this represents the person the reading is being done for. If cards are reversed when drawn then some readers consider that to have special meaning, but others will ignore the reversed state and only consider the card. The reader will interpret the card and its position within the spread to answers the questions that the person has. A great deal of practise and skill is needed to correctly read the cards.

Many people that phone The Circle of Professional Clairvoyants want to ask questions regarding love and relationships.

Perhaps you want to know if the relationship will last, or if you are truly right for each other…Senior Reader Paul (PIN: 7135) has been consulting the Tarot for over forty years and would be happy to answer your questions. Equally Senior Reader Jacqui (PIN: 7108) uses Tarot and believes it can be ‘wonderful tool of enlighten when respected and used in the proper manner.’

You don’t necessarily need a complicated spread to seek answers about your love life. Why not try a five card spread to bring you the answers you need. You can ask one of our readers to do this for you, or try it at home. Shuffle a deck until you feel the cards are ready to answer you, cut the pile in to three decks with your left hand. Take five cards from one of the piles. Lay them in any pattern that feels right to you and then interpret them.

As you might expect card two is similar to one, but in reverse – so what the other person is bringing to the table in terms of your romantic partnership. Will they give you the love, support and spiritual growth that you need to flourish.

The third card is probably the most important in this spread, it looks at the harmony of the relationship – do you work/gel together, will the union be a happy one…Do you have an emotional future with this person and what difficulties will you have to face up to.

Card four again looks in reverse at things from your partners perspective, can you give them what they are seeking from the relationship. Are there any historical emotional problems, past relationships and life baggage that will prevent you moving forward with this person.

Lastly card five deals with longevity, the question most of us want to ask – are they the one, will we spend our lives together? If a negative card is produced here there is a tendency to read that it means the relationship will not make it in the long-term. This is not necessarily the case, but it probably does mean that there are issues to work through to guarantee a happy ending.

Whatever the spread says, it is important to remember that many people will come in to our lives, whilst we walk on this earth plane, some are meant to be just be friends, others are meant to teach us something and then move on and then there are those that we should be with forever. Keep an open mind and an open heart.