The Last Letter from your Lover 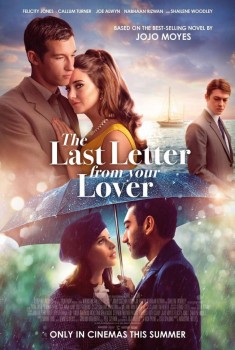 If you are looking for something to watch at the cinema in August, you might want to consider – The Last Letter from your Lover, which came out on the 6th August.

You might recognise the title of the film, as it carries the same name as the novel it was based on by Jojo Moyes www.jojomoyes.com/books/the-last-letter-from-your-lover/

What do we know about the Cast?

Shailene Woodley plays Jennifer Sterling. You might know this actress from Big Little Lies and The Fault in Our Stars. She is one half of a 1960’s couple, Anthony her partner is played by Callum Turner (The Capture). Felicity Jones, an Academy Award-nominated actress plays Ellie. Three other cast members that might also ring a bell are: Ncuti Gatwa (Sex Education), Joe Alwyn (The Favourite’s) and Mogul Mowgli (Informer).

What do we know about the story?

Put simply, the film is a love story, set between the present day and the 1960’s, that hops back and forth in time and location from London and the French Riviera.

Studio Canal who financially backs the film, describe the story: “It tells the tale of elegant Jennifer Stirling and how her life becomes inextricably interwoven with that of Ellie Haworth, in life-changing events that connect them across almost half a century. Jennifer lives a luxurious life with her wealthy and powerful husband, Laurence. When an unfortunate event wipes her memory, she struggles to find her identity until she stumbles upon wistful love letters hidden in her home.”

Ellie who is a journalist in London in modern times, becomes enthralled by Jennifer’s love letters, that outline a passionate affair she had with a foreign correspondent. It takes the help of an archivist to piece together the 1960’s story, but along the way Ellie and Jennifer’s lives become intrinsically linked forever.

This film is actually classed as a Netflix Original, directed by Augustine Frizzell for the UK’s Blueprint Pictures and Canada’s The Film Farm. However, it is only being released on Netflix as opposed to in cinemas or simultaneously in some territories.