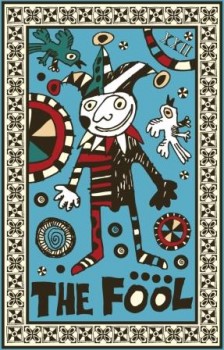 When folk are first learning about Tarot they often prefer to concentrate on the 22 powerful cards that belong to the ‘Major Arcana’. Over the coming year we will explain the common meanings of the cards. Decks do differ, so the running order of the cards or name variations may occur. But generally speaking decks start with The Fool; often this card is labelled as 0 or is left unnumbered.

These meanings are meant to give you the beginnings of Tarot, but if you are having a Tarot reading with one of our psychics then they will explain the significance of the cards in relation to your own life, the meaning of the cards will also be interpreted based on the spread being dealt, the other cards chosen and the position of the cards…

In Tarot not all cards are literal, and The Fool is one such example – this card really represents new beginnings. With fresh starts you are often buoyed with enthusiasm, and so this card characterises that optimism and excitement. It is likely when you start a new venture that some will disparage your plans. Rather than ignoring these comments, don’t be ‘foolhardy’, check your plans are rational and feasible before ploughing ahead, so that you don’t rush into things without properly thinking them through – leading yourself into dangerous ground.

There are two possible meanings to this powerful card. Firstly the card may represent a person entering your life who will be influential – but keep in mind the card is called ‘magician’ and as such there may be trickery or deception afoot. The second meaning is where the card actually represents you! Perhaps you are underestimating your skills and abilities? You are more powerful than you believe… You are equipped with the talent, but now you must find a way to release your competencies and fully express what you are capable of.

Come back to learn about the High Priestess, The Empress, The Emperor and The Hierophant.